THE COLOURFUL HISTORY OF SANNÄS MANOR

The history of Sannäs Manor stretches back centuries.

A part of the magnificent history of the manor was revealed only recently when we found files missing for years in the old maintenance man’s locker.

In the olden days there was a village, a mill and a fortress along the River Ilola, on the site of Sannäs Manor. The first Sannäs Manor building was built in the 1400s. Since then, the owners have changed frequently: sometimes the estate was handed over to the monastery, and at other times it was lost in a card game. One of the owners of Sannäs Manor even ended up captured in the Tower of London.

The present manor building was designed by Carl Ludvig Engel in the 1830s, and the garden was sketched out by Paul Olsson, a well-known designer of Kultaranta (the summer residence of the president of Finland) and Esplanadi (park and esplanade) in urban Helsinki.

In the 1900s, Sannäs Manor was a scene of many “secret machinations”.  The manor has welcomed numerous notable guests, such as Akseli Gallen-Kallela, Aino Ackté, Alvar Cawén, and Sofia and Carl Gustaf Emil Mannerheim. In 1983, as many as 7 Nobel laureates visited this place.

Sannäs Manor has hosted many wonderful dinners and prepared many delicacies. There used to be a cheese dairy in the park, of which only ruins remain today. Among others, products of the cheese dairy were served to the crew of a German submarine whose captain’s last words to the Finnish people were: “As we continue our journey, we will enjoy the Manor’s butter and cheese underwater.”

Shortly thereafter, the submarine slid beneath the waves of the Gulf of Finland.

Sannäs Manor even has its own ghost.

Enjoy the journey through the rich history of Sannäs Manor! 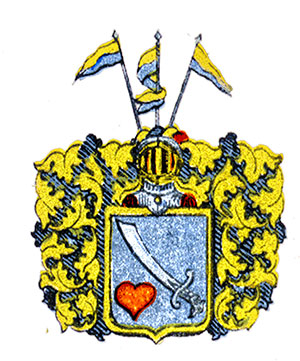 The early years of Sannäs Manor

In the 1400s, Sannäs was owned by Peter Svärd, of a wealthy and powerful family. He was originally from Livonia.

In 1467, Paavali Skytte became the owner of the estate and donated it to the monastery of Naantali in recognition of his daughter Anna being accepted as a resident of the monastery.

Later, the monastery returned the land to Skytte.

In the 1500s, the manor was a “rälssitila”, i.e. a tax-exempted farm for providing an armed man and a horse for the army.

Sannäs’ most famous landowner of “rälssitila” was Pentti Laurinpoika, a gunman who served during the war against Russia and was raised to the nobility as Sabelhjerta. Sabelhjerta was a supporter of King Sigismund and joined him in the war against Duke Charles when Charles and Sigismund fought for Swedish kingship. Duke Charles won the battle, and Laurinpoika was lucky to be spared revenge as a “good” man, and was able to win Charles’s approval. He was later appointed as head of the castle in Narva.

In the 1600s, the estate of Sannäs Manor was at its largest. Land was also donated to tenants.

The Great Northern War in the 1700s was a difficult time financially for Sannäs Manor.

The manor was owned by Otto Henrik Sabelhjerta who lost the mansion in a card game to family Bure. From Bure, the manor was inherited to family Boije, and in 1766 it was ruled by Otto Krister Boije who pledged the stunning building as security for his debts and was eventually forced to sell it to Johan Anders Jägerhorn.

Jägerhorn was a supporter of General Yrjö Maunu Sprengtporten and later commander in chief of Finland. In time, Jägerhorn got into trouble and fled to Russia and later on to Holstein.

The Irish emigrants lured Jägerhorn into the Irish War of Independence, during which he was captured and imprisoned for two years in the Tower of London. When Finland came under Russian rule in 1809 Alexander I, Emperor of Russia, urged Jägerhorn to return to his homeland.

The Irish Minister of Trade and Industry, who visited Finland at that time, visited Porvoo and gave Jägernhorn a memorial plaque, which was mounted to a house close to the old bridge in Porvoo. Today, the plaque still reminds us of Jägerhorn’s distinguished engagement in the Irish War of Independence.

The present Väentalo building in Sannäs Manor is from the 1700s. 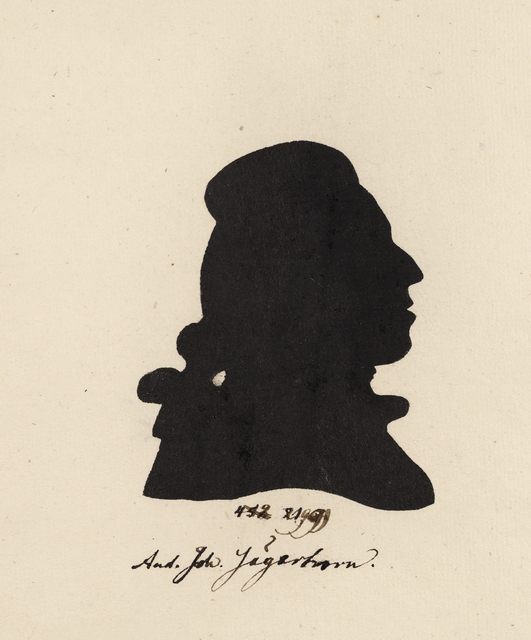 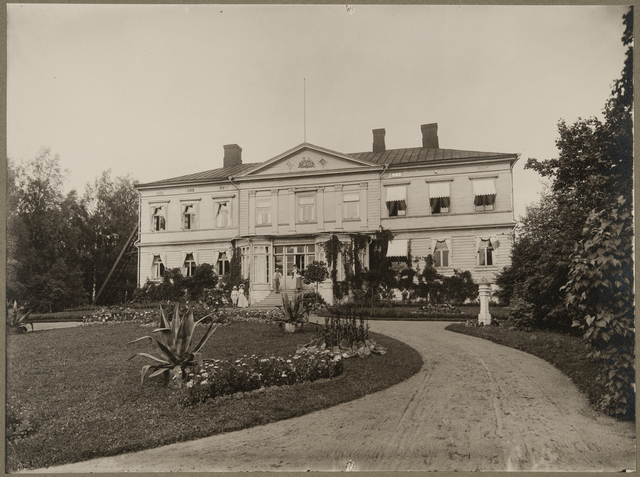 The present manor building and the gorgeous garden are established

The spectacular park surrounding the manor was later built based on Paul Olsson’s design.

Paul’s father, Svante Olsson, was the City Gardener of Helsinki from 1889 onwards. Paul and Svante designed several green areas in Helsinki and, for example, the park in the President’s summer residence Kultaranta in Naantali. They also participated in the design of the most famous park in Finland, the Esplanade Park in Helsinki. 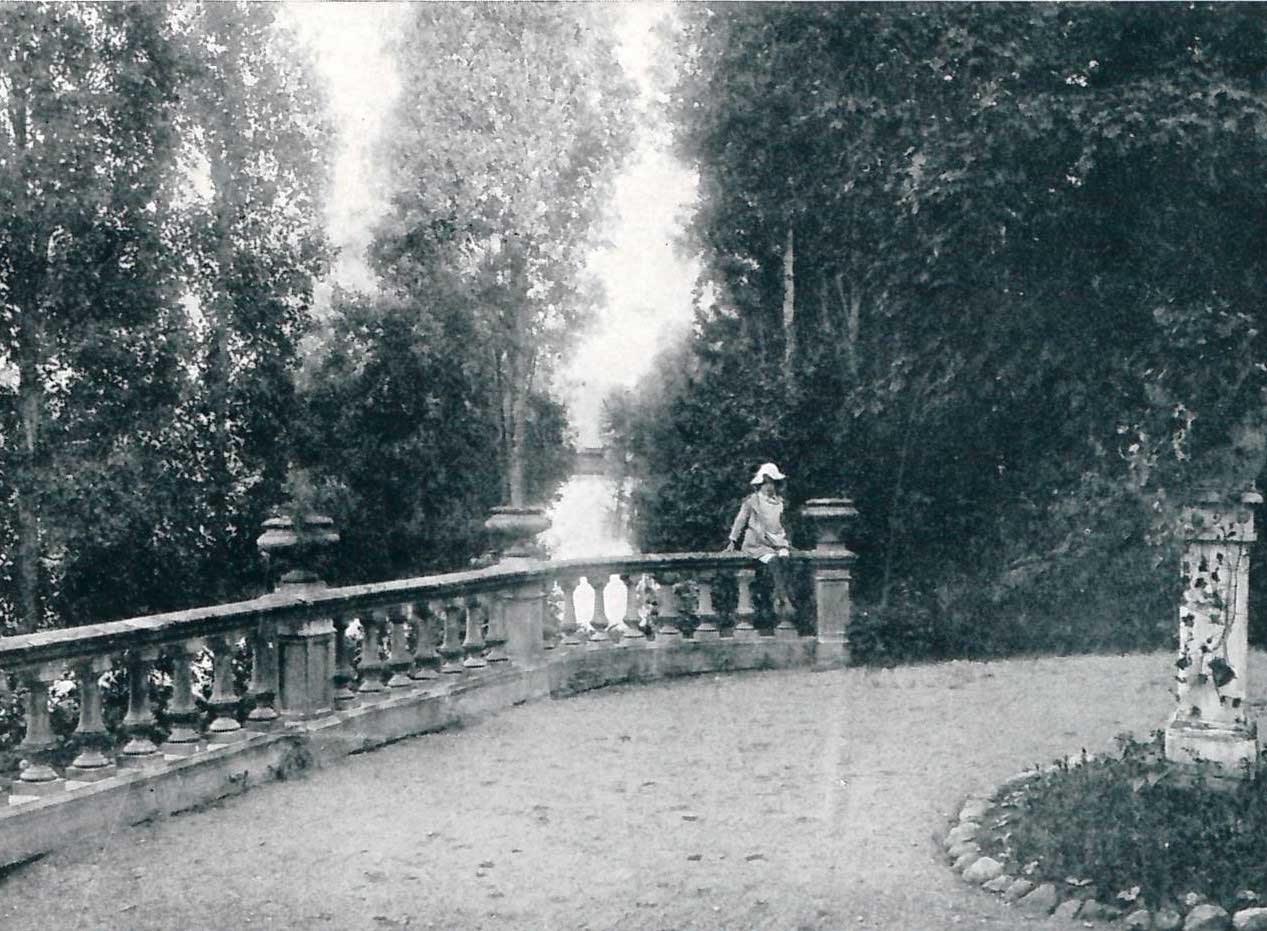 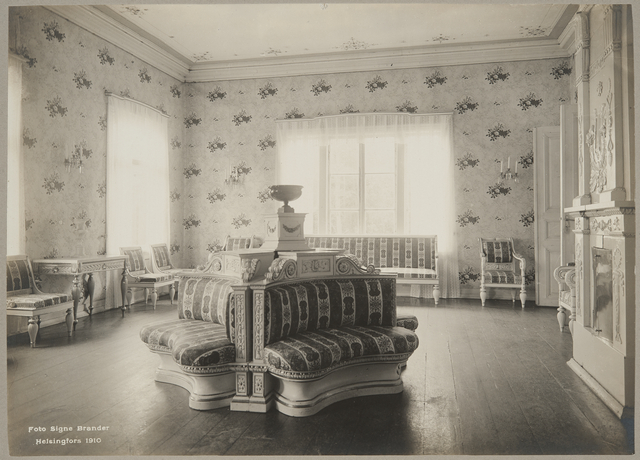 Both Elsa and Gustav were great friends of the home country and supported Mannerheim’s idea of Finland’s independence. The Military Committee of the War of Independence met in the White Hall of Sannäs Manor (current lecture hall in the upper floor of the manor).

To cover up the activities of the Military Committee, the participants always arrived to the mansion with their wives for dinner, after which the gentlemen then moved upstairs to hold their meetings. All documents regarding the meetings were hidden in a secret locker in the greenhouse in the manor’s garden.

In the autumn of 1917, a German submarine arrived in Finland, to the island of Hudö (off the Gulf of Pernaja), which Elsa owned. The submarine brought along eight Finnish jaegers who returned from training held in Germany. The submarine had been stuck in a mine net for 12 hours before it got loose and reached its destination. Gustav and Elsa’s father Ernst von Born were there to meet the vessel.

The submarine’s crew were brought food and supplies from Sannäs. Among other things, they got a Swiss cheese so large that it didn’t go through the submarine’s hatch. The last words of the submarine captain to the Finns were: “As we continue our journey, we will enjoy the Manor’s butter and cheese underwater.”

The submarine never returned to Germany but remained one of the secrets of the Gulf of Finland.

Elsa was arrested by the Reds on Good Friday 1918. However, the war ended before he she could be charged.

When Mannerheim first arrived in Sannäs in 1919, he said: “This is the place where the spark was lit that later started the fire in Ostrobothnia.”

Mannerheim admired Elsa’s courage and everything she did for her country.

On his first visit, Mannerheim was given his own room on the first floor of the manor.

At the banquet dinner a whole roasted pork and krutaja kascha, a Russian specialty of buckwheat, were served.

This was the only time Sophie Mannerheim visited Sannäs, and she was not in the mood for celebration. She was described as cold, beautiful and distant.

The geese of the manor had laid eggs on the same day, and the artist Alvar Cawén painted a beautiful miniature painting on the shell of one of the eggs. The goose egg was brought to Sophie in the morning with her morning coffee. Mannerheim has reported that Sophie had kept the goose egg in Paris as a precious treasure for at least two decades. 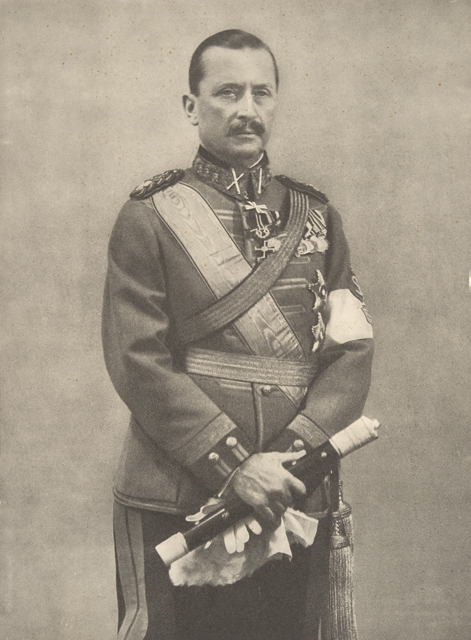 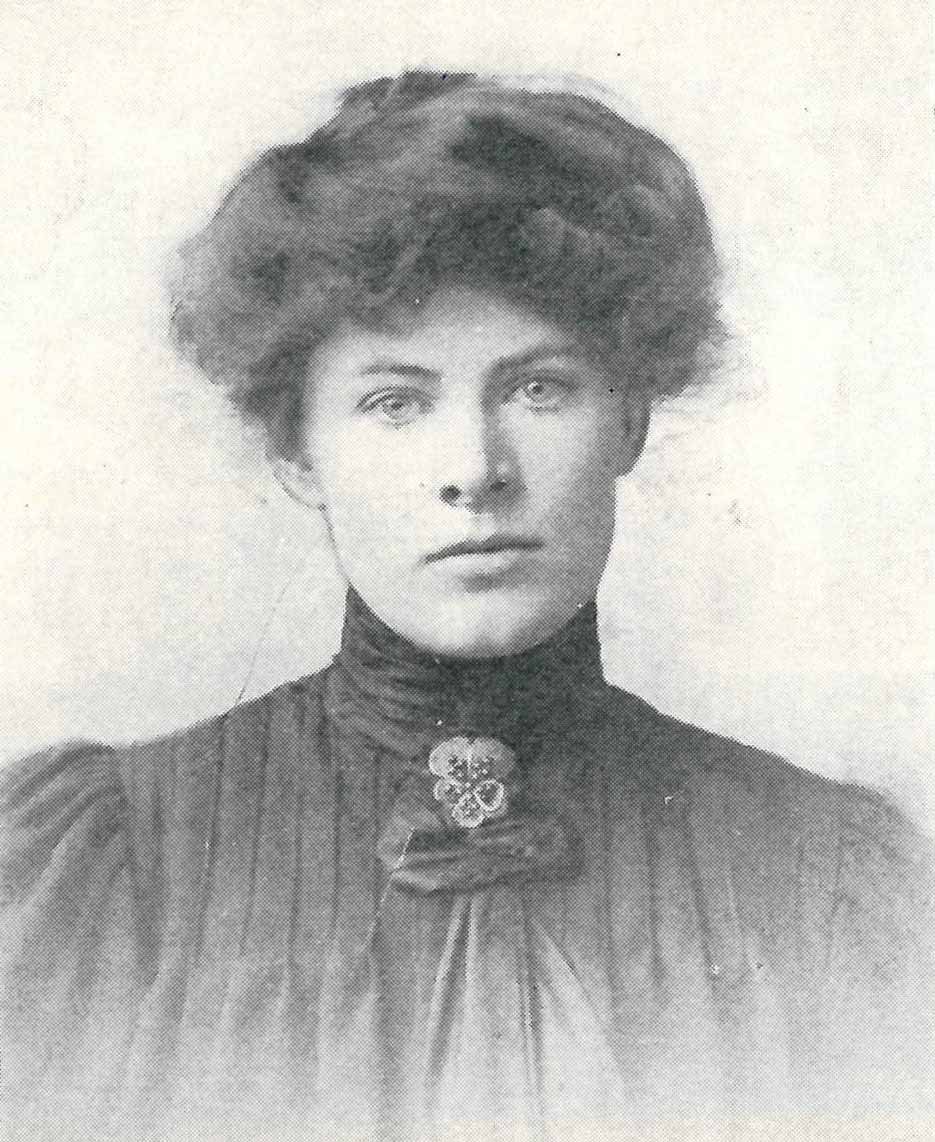 The tasty years of Sannäs Manor

One evening Aino Ackté had arranged a dinner at which Akseli Gallen-Kallella proposed a pact “against deceitfulness and fraudulence”. This pact was formed in Sannäs at a festive dinner on 2 January 1920.

The menu for the dinner was illustrated by Alvar Cavén.

The dishes had funny names, and today you can still enjoy a slightly modernised version of the same menu at Sannäs Manor.

Elsa had also written a poem for each guest. In our archives, we found the poem written for Mannerheim:

The poem includes a reference to the pact “against deceitfulness and fraudulence”.

The text is taken from Elsa Silfverhjelm’s diary from the 1960s. Erik has donated his mother Elsa’s diaries, some of which were only recently discovered.

The title is “Short Notes from the Red Spring 1918”, author Elsa Von Born.

The end of the era of the nobility in the manor

In 1927, Baron Silfverhjelm had to sell his 300 hectares of farm, and this ended the time of the nobles in the manor.

Gustaf and Elsa separated, and Elsa became a writer.

Since then, the manor has had several owners, up until the early 1970s, when the manor was purchased to serve as an educational centre for Lifim (offering continuing education for Finnish business executives).

First, the Lyseo building was built, followed by the Kymnaasi building and sports hall in the 1980s.

However, the time of the dignitaries did not end, even though the era of the nobility came to an end. Over the years, Sannäs Manor has been visited by many top business experts. In 1983 there were as many as seven Nobel Prize winners here!

Sannäsin Kartano Oy was acquired by Aalto University in 2010 and in 2018 by Plantvest Oy. The conference hotel is currently operated by Sannäsin Kartanolaiset Oy, run by Tuula Kyöstilä and Kirsi-Marja Virta. Read the story of the current entrepreneurs! 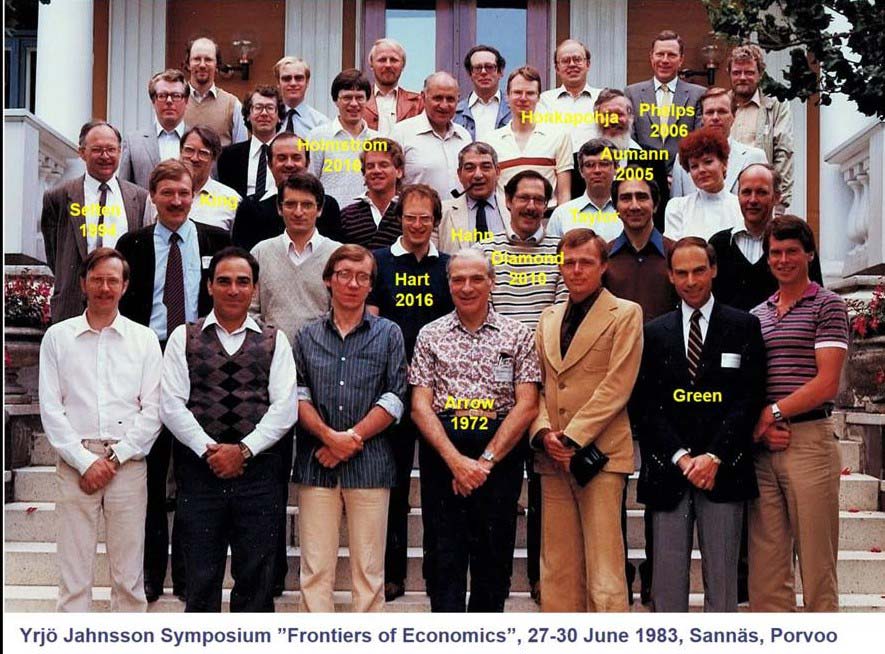 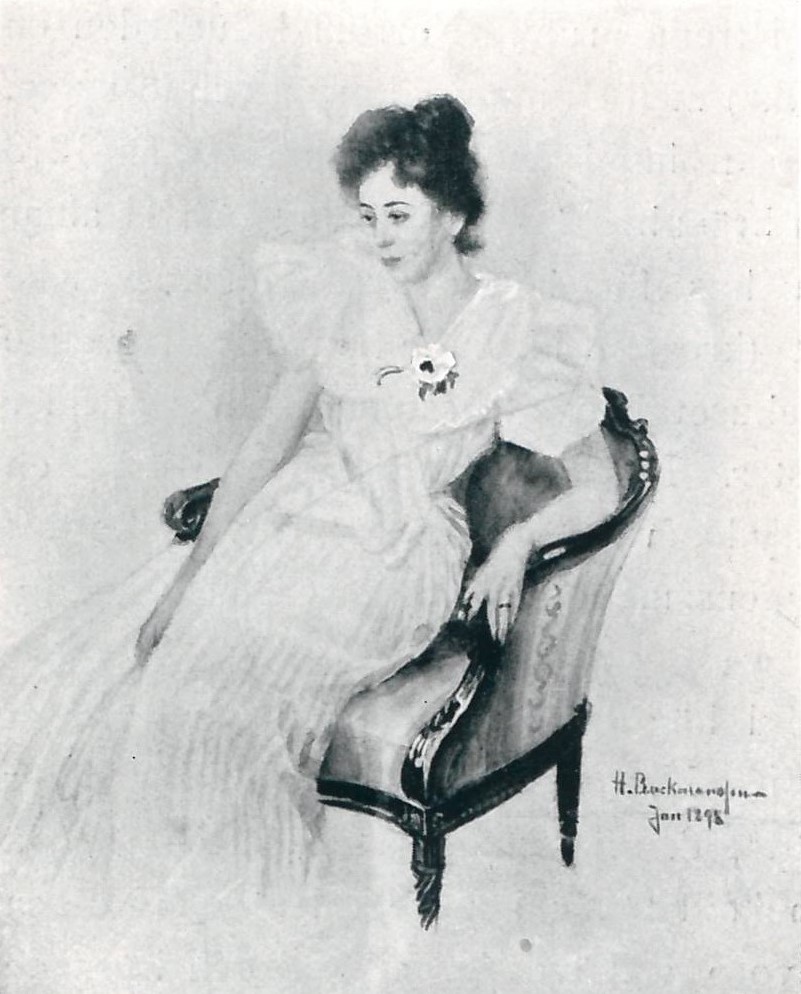 Ghost of the Manor

Ingrid Wilhelmina Ekelund who inherited Sannäs Manor in the early 1900s was a child-loving woman. Ingrid married Gustav Silfverhjelm and had a baby, but died of scarlet fever shortly after giving birth.

Several people living in Sannäs Manor have reported seeing Ingrid wandering the halls of the manor. The ghost appears especially when children visit the manor. The happy voices of children seem to encourage Ingrid to make an appearance.

Other strange activities have also been reported. Steps may be heard in the corridors, and many children have allegedly heard a voice singing softly, like a lullaby. Ingrid isn’t reportedly a malicious ghost. The young mother’s soul just wanders through the halls of the mansion looking for her child.

Delicacies of the manor

Sannäs Manor is known for its delicacies, some of which date back centuries. We cherish traditional recipes for apple pastries, delicious malt loaf, and blueberry liqueur. Various types of spirits were also produced here, including arrack punch. Since arrack punch bottles must not be kept still during the fermentation they were rolled on top of the billiards table upstairs from one cushion to another. This was fun family activity for the people living in the manor. (Reported by Erik Silfverhjem in his diaries).

The wine cellar was another source of pride. Hundreds of bottles were stored in the cellar, most of which were unfortunately gulped down by the red soldiers during the wars. Some of the bottles were broken. 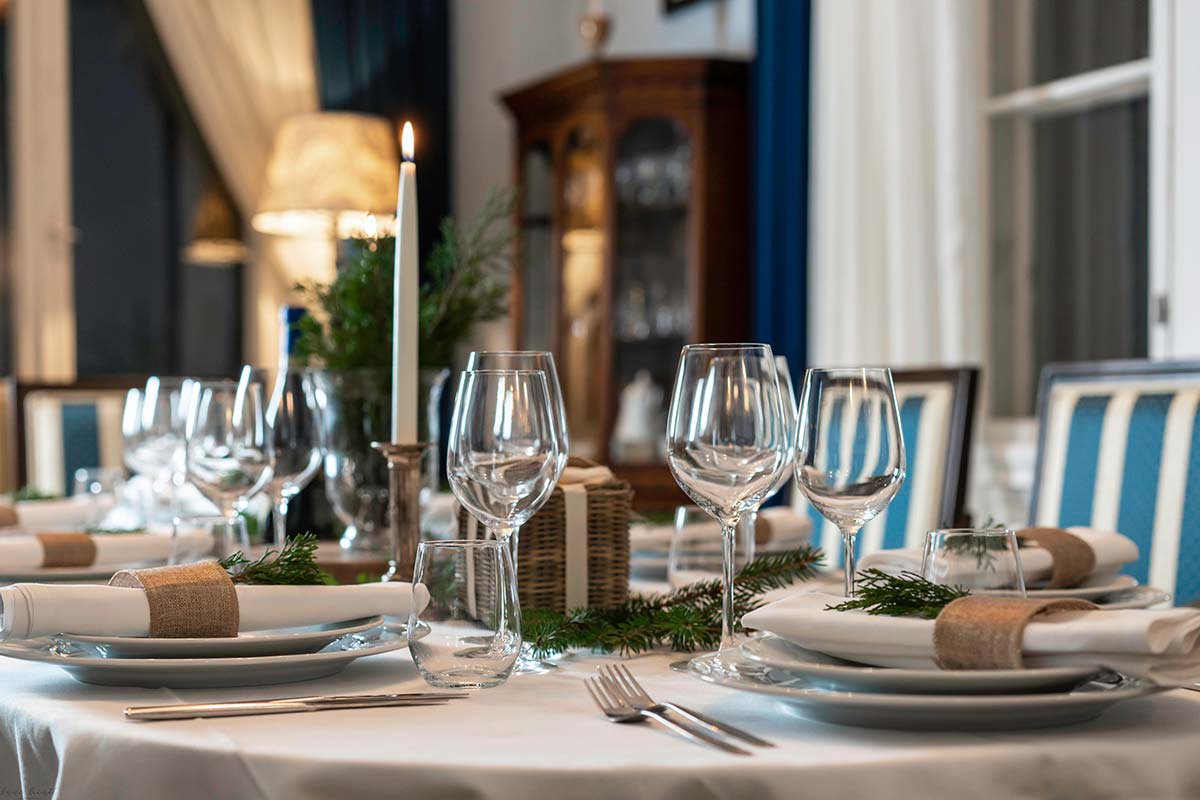